Cuomo Gets Shut Down By Homeowner After ‘Back-Handed Swipe’

CNN’s Chris Cuomo attacked Mark McCloskey, the man who recently defended his home with a rifle from a large mob of angry demonstrators in St. Louis, during an interview on Tuesday night and was taken aback when McCloskey fired back with a zinger.

“It’s just a horrible picture of what’s going on in America right now, so to me it’s not about what’s right and what’s wrong just in a court of law,” Cuomo said. “It’s about what we want, right and wrong, about how we treat each other and that’s why the president retweeted this tweet, Mr. Watkins. You know it and Mr. McCloskey, you know it.”

“He retweeted it because he liked the image of white resistance to this movement, and I’m not saying that was fair to you, but we know that’s why he did it because that’s why he deleted it,” Cuomo continued. “I wanted you to speak for yourself.”

Cuomo was apparently talking about a video from ABC News that showed the incident on Sunday night where angry demonstrators illegally trespassed onto his private property, and McCloskey met them with a rifle and told them to leave the property.

McCloskey fired back, “I’m glad you’re a mind reader because no one else thinks you are.”

McCloskey’s statement seemed to throw Cuomo off-balance as he then tried to explain what he was trying to say.

NewsBusters’ Managing Editor Curtis Houck highlighted one of the clips from the interview on Twitter, writing: “Chris Cuomo ends with back-handed swipes at Mark McCloskey as an image of whiteness and opposition to Black Lives Matter, so McCloskey fires back with some [fire].”

Chris Cuomo ends with back-handed swipes at Mark McCloskey as an image of whiteness and opposition to Black Lives Matter, so McCloskey fires back with some 🔥🔥🔥🔥 : "I'm glad you're a mind reader because no one else thinks you are." pic.twitter.com/ewowmBeSFg

Cuomo continued to ask McCloskey loaded questions throughout the interview, including, “How do you feel about becoming the face of political resistance to the Black Lives Matter movement?”

“First of all, that’s a completely ridiculous statement,” McCloskey responded. “I am not the face of anything opposing the Black Lives Matters movement. I was a person scared for my life, who was protecting my wife, my home, my hearth, my livelihood.”

“I was a victim of a mob that came through the gate,” McCloskey said. “I didn’t care what color they were. I didn’t care what their motivation was. I was frightened. I was assaulted, and I was in imminent fear they would run me over, kill me, burn my house. And you have to listen to context in St. Louis where in June 2nd of this year, I watched the city burn, I watched the 7-11 get smashed in, looted, and burned for 40 minutes on live television with nobody showing up to do anything. And I realized at that time, we’re on our own.”

“When bad things happen, they unpredictably turn real bad, real fast,” McCloskey concluded. “That same night, retired St. Louis police captain David Doran was murdered. These things get very bad very quickly. When those people came through the gate, when it was a mob, I didn’t take the time to see their birth certificates or anything else, I was defending my — my house, my life, my wife and what I spent 32 years building there.”

Predictably, Chris Cuomo doesn't like when people come up to him with his family, but if you're someone like Mark McCloskey, he doesn't care about your safety. Instead, he lectures McCloskey as the one who was in the wrong, not the mob.

The Daily Wire, headed by bestselling author and popular podcast host Ben Shapiro, is a leading provider of conservative news, cutting through the mainstream media’s rhetoric to provide readers with the most important, relevant, and engaging stories of the day. Get inside access to The Daily Wire by becoming a member. 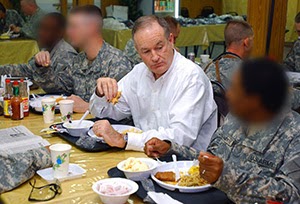 NY’s Failure To Use Emergency Hospitals Is Another Reason To Distrust Govt.…